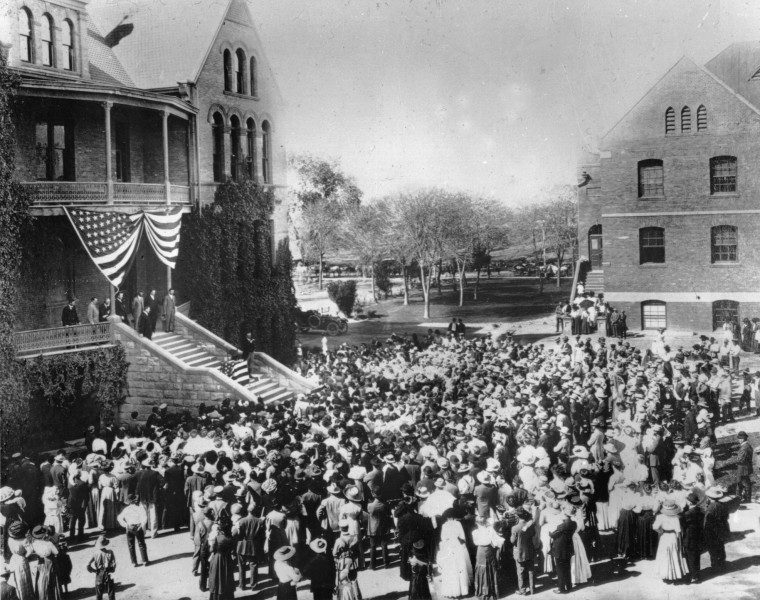 Final installment in a series on why U.S. Universities are great

Considerations beyond standardized test scores and high school GPAs, the rule in many nations, are common in admissions processes at U. S. institutions. Holistic admissions, when properly managed and guided by faculty insight, provides wisdom that enlivens the numb simplicity of easily measurable aspects of student performance.

The past few decades have produced increasing concerns regarding freshmen admissions. The criticism of over reliance on standardized test scores and high school academic records has led to the inclusion of various extracurricular characteristics, or more individualized measures, of student experience to determine college readiness. Personal interviews, essays, and videos are growing in popularity for admissions consideration.  All valuable, however none is a substitute for academic readiness.

Observers in and out of the academic community fear these considerations are a tool to increase enrollment and revenue by admitting more students who may not be the most qualified to help pay the bills. Academic merit determines student and university effectiveness, not cash flow.  Resources follow excellence.

Notwithstanding either of these concerns, the University of California’s “parents,” Berkeley and UCLA, show dramatic increases of out-of-state and international admissions. The disaffected groups contend that decreases in state higher education funding — over the past five years reductions total 30% — are the culprit. Out of state admits are only 11% minority, the university averages 30%.  Academic leaders argue the revenue streams from students willing to pay the high costs are essential.

If admitted students had strong indicators for success, such as class rank, standardized test scores, high school GPA, and high school curricula, that demonstrate college readiness a fair and level playing field would rule. However, U.C. has reduced the stringency of requirements for out-of-state students resulting in displaced and displeased in-state students who otherwise would be qualified. The handwringing is justifiable.

U.C. President Janet Napolitano contends upfront that falling state funding has mandated the policy. The excuse has some validity but does not diminish the power of policies that put meritorious performance first. The University of California’s DNA grows from California’s globally admired community college system. Any underperforming or unprepared California high school student has the opportunity to enter a community college and prove their worth, based on merit in academic performance, rather than their ability to secure a loan.

Policies biased towards high-ability-to-pay-students have led to a drop of in-state freshmen of nearly 50% on some U.C. campuses. California is not alone. According to the Daily Caller, “the University of Illinois’s flagship Urbana-Champaign campus, for instance, a staggering 5,000 students are Chinese— more than 10 percent of the student body.” Illinois’ increases in international enrollment closely parallel decreases in state funding. But, regrettably, some international students coming from “excel-at-all-costs” cultures are twice as likely to cheat according to Business Insider.

The reason for the demand and willingness to pay from internationals is the perceived quality of U.S. institutions. Quality will evaporate if fiscal management matters replace academic ability.  Positive perceptions from abroad will vanish.

All of this while other cost variables — administrative positions have doubled, enrollments are up 30%, and faculty appointments are flat – have apparently been ignored.

U.S. universities have consistently been excellent for thoughtful participation of faculty members in all academic decision-making. Academic decisions start with admission. Accepting a less prepared student is unfair to both the student and institution. A level, performance-based, mission-guided, playing field is essential.

Faculty at the center of holistic admissions processes can mete out what is important to the student as well as the institution and its academic mission. Traditionally that was the case but evidence shows the practice is on the wane.

Academic excellence is the nucleus of American leadership in higher education, and frittering it away is comparable to “selling our soul” for baubles.

I will be taking a summer break for a few weeks. WW

1 thought on “Admissions, Resources and Quality”