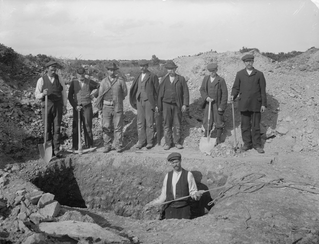 Originally published March 26, 2013.  Slightly updated and worth a second look.

This reflection is not high-minded academic thinking; it works at the local McDonald’s franchise, and hardware store; at the mom and pop grocers on the corner, and at GM, IBM, and ADM. It could work in the statehouse too, but bureaucrats, pen-pushers and politicians pilfer purpose, too frequently by design; almost always for self-protection and self-preservation; too rarely for progress.  Little has a greater impact on effectiveness and efficiency in an organization than management’s willingness to trust and delegate. A lack of delegation steals the life and spirit of those who toil for students, and without them, there is nothing. No trust.

Staffs, clerical workers, assistants and advisors of every stripe imaginable are the front lines in putting a face on a university. The face cannot be given from marketeers…it must come from within and from the “neighborhoods” in which work is carried out: colleges. The university’s face is joined to the campus spirit because there is a fit between responsibility and authority. Without that fit, people give up on the work. Micromanagement becomes a form of theft as initiative is drained from those who labor.

My good friend, who has spent his entire life in apple orchards, would agree. Hire good people to work the trees and let them ply their craft. Teach and lead them, but you can’t cut every branch yourself. Simple leadership and management: no mysteries.

At another level, micromanagement robs the life of an enterprise because those who should be concerned with vision and the pronouncement of the value of the organization to the greater community are consumed with details. Leaders who major in the minors and are driven by the fantasy of complete control can’t lead.

Micromanagement robs an enterprise simultaneously from the bottom up and the top down. The intended effect of micromanagement — precision, cadence, and near perfection — is impossible to attain and creates frustration from above. Discouragement from the bottom up occurs as those who want to work become disenfranchised and fearful of taking risk. Without risk, attainment of quality is impossible.

All micromanagers suffer from some form of perfectionist thinking, or a lack of confidence in those with whom they work, leading to the deadening effect of sapped individual initiative. Initiative correctly managed makes organizations come to life. Micromanagement in any form paralyzes purpose, progress, and performance as fear drives decision-making.

Micromanagement comes from leaders who fear failure. The perpetual goal of the fearful leader/manager is to make sure that he/she can’t be accountable for anything but success. Only confident leadership is willing to accept blame when organizations sputter. The blame game, a cousin of micromanagement, likewise robs initiative, and has the opposite effect of attaining perfection and quality. Fear of reprimand by a micromanager stymies energetic workers and drives initiative out the door.

According to the National Federation of Independent Business, micromanagers are “control freaks.” This evidences itself as unwillingness to delegate, reluctance to hand out creative tasks, and a constant hovering over those managed. Frequently these traits are followed by an immediate retraction of a duty or task at the first sign of faltering.

On the other side of the coin, Larry Popelka, in Bloomberg Business Week’s “In Praise of Micromanagers” cited luminaries Steve Jobs of Apple, Larry Ellison, Oracle’s leader, and Bill Gates. He even threw in Walt Disney. I would argue that each of these leaders engage toward purposeful ends, believing details important to excellence. German-born architect Ludwig Mies van der Rohe is often credited with the thought, “God is in the details.” Maybe, but that does not mean that micromanagement makes God, or the details, better.

I bet Jobs, Ellison, Gates and Disney would agree.

Leaders and innovators share ideas and vision with people at work in response to goals for progress. It is not about protection, face-saving, self-preservation or the avoidance of responsibility. But the crafty micromanagers have spent a lifetime at it, and make it look like leadership: an elegant, self-serving deception only revealed as organizations falter on the precipice of failure.

Our most effective universities, businesses, corporations, and government organizations need leadership that empowers people to work, not fret, and to grow as they labor. And then organizations thrive.