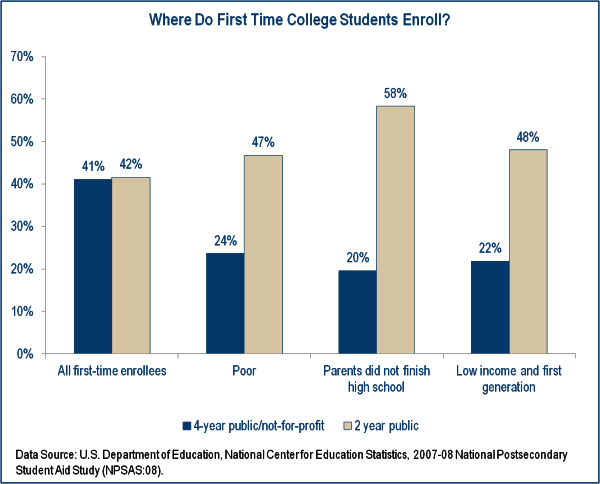 College costs and student debt burdens are on the rise.   The cost effectiveness of all post secondary education is being scrutinized. President Obama’s plan for free community college is a politically tempting, fiscally irresponsible overreaction to that scrutiny and the tsunami of concerns regarding the cost and value of higher education.

According to U.S. News, “Of the 1.8 million high school graduates who took the ACT in 2013, only 26% reached the college readiness benchmarks in all four subjects. Another 27% met two or three of the benchmarks, and 16 percent met just one”. In addition, the ACT claims that 31% met no college ready benchmarks. English, reading, mathematics, and science scores are down. Math and science lead the tumble.

When college readiness questions arise, community colleges are the place to start for at least seven reasons.

One: They are low-cost. In Illinois the average community college tuition and fees for 2014 totaled $3,526. For public four-year institutions the average was nearly four times that.

Two: Nearly 70% of community college attendees work while studying, and one third work full time. Moreover, those students who are working borrow less. Community college borrowers represent 37% of all borrowers while 61% of the students at public four-year institutions borrow. Egregious borrowing occurs at for-profits universities, where 85% of the students borrowed, with little means to pay back squandered loans on nearly worthless degrees.

Three: Community college faculty are traditionally well prepared and committed to teaching. Eighty-five percent of the full-time faculty hold a master’s or doctorate. These qualifications are sufficient for courses offered during the first or second year of study.

Four: In most states, core curriculum requirements are easily transferred to senior institutions. Be assured, the greater the clarity of student career goals, the more likely that seamless transfer will occur.

Five: Class sizes are smaller. Many community colleges report average class sizes of fewer than 20 students. Instruction and mentoring with one-on-one interaction, comparable to or better than, senior institutions occurs. Additionally, adjunct faculty from universities are the same people teaching at nearby community colleges so they can support their families.

Six: Remedial courses and tutorial support are readily available. Concerns exist regarding the effectiveness of remedial coursework but one in five students at all institutions needs remediation. Students who don’t avail themselves of “catch-up/get-ready” opportunities — avoiding them for fear of low GPA’s or non-transferability — flunk out when they transfer to a senior institution, usually in debt and without a degree.

According to the Lumina Foundation earning a Bachelor’s degree after the completion of an Associate’s degree is a good approach. More pointedly, the Associate’s degree is a better predictor of timely Baccalaureate completion than freshmen admission processes at almost every university; at less cost to student and institution. Sixty percent of students completing the 2-year degree followed by transfer to “State U” complete Bachelor’s degrees in 6 years or less, beating both Illinois and national norms. The ancient admonition, “finish what you start” may be in play here.

Even excellent students with strong academic records can benefit from community college attendance according to a John Marcus analysis in The Hechinger Report. Research universities, especially those that are not state flagships, should address the needs of community college transfers assiduously and pursue those students doggedly.

It is immoral, costly, and cruel to mislead students into a university when they are not ready — eventually eroding quality, reputation, and enrollment.

A 21st century view of university effectiveness focused on the changing nature of higher education and student aspirations for a better life serves all best. This view is being demanded as students are voting with their feet.

However, university leadership appears numb and dumb rather than responsive and agile.

1 thought on “Community College: A Place to Start”