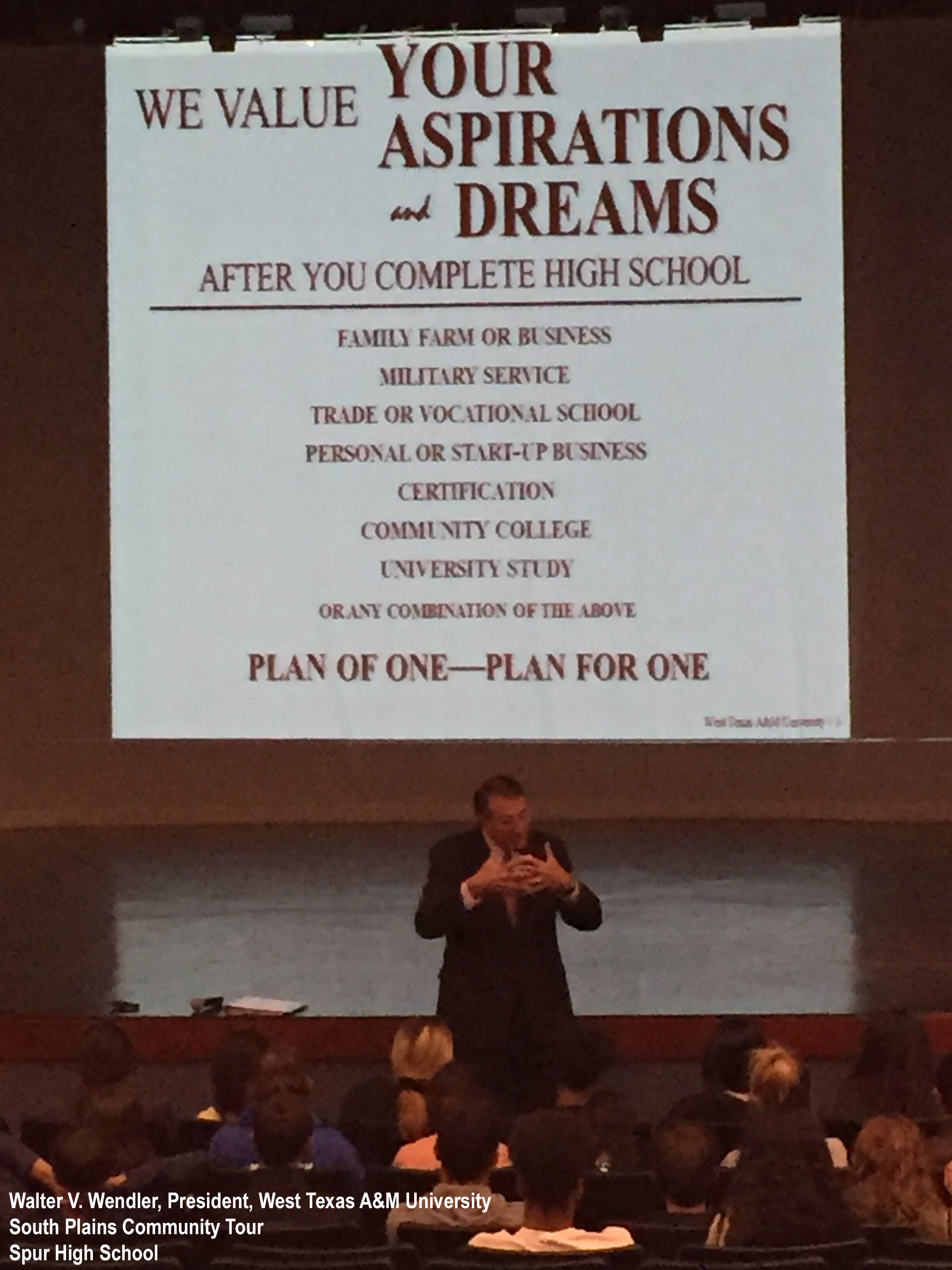 Sixth in a series on what to look for in college.

Abernathy, Texas, is a small town just west of I-27, an old stop on the Santa Fe when it was the way to get from Lubbock to Amarillo. Its population of 2,000 is larger than most other South Plains communities glued together by little more than their schools.

Houston ISD, with 200,000 students, serves two and a half times as many students as are in the nearly five dozen ISD’s on the South Plains. The challenges that Houston ISD has faced are significant. The state placed it in leadership and management receivership. The constellation of small-but-tough schools populating the South Plains is different. There is a fierce sense of independence and ownership of the schools, fueled by a powerful but humble survival instinct. Communities centered on families allow school leaders, teachers and staff at every level to guide students beyond algebra and literature into productive citizenship. Passion for this charge creates a family-like atmosphere.

In Abernathy I watched the school principal Mr. Ezra Chambers with admiration. He introduced me to a young lady who is committed to coming to West Texas A&M University, and he told me what a great student she would be. Proud like a father. As student after student entered the auditorium, they showed appreciation for their principal. The last student I met that day was his daughter. She showed the same kind of appreciation for Mr. Chambers. While in loco parentis may be out of favor in many larger urban school systems, it appeared to be matter-of-fact at Abernathy High School. Mr. Chambers knew everyone, and everyone knew him. This is commonplace in many South Plains Schools. The school is a family, not intended to displace the immediate family, but people with a shared responsibility of one to another at every level. Wilson, Amherst, Sudan, Muleshoe and Klondike are but a handful of examples.

In Spur, Texas, Principal Mike Norman had a similarly positive and paternal relationship with students. He knew each of them. I explained a program at West Texas A&M University that allows any family that has three members concurrently enrolled to only pay for two. He told me he was going to call the mother of triplets attending the high school and let her know of that opportunity. WT values families and WT appreciates the ever-increasing costs of attaining a college education. I am never surprised when teachers and administrators in schools raise their eyebrows and nod their heads approvingly when this opportunity is discussed. However, I am surprised that in almost every case students react the same way. Even students in these micro metropolises know that individual liberties and responsibilities nurtured in families are the building blocks of a free society.

The research on the interdependence of family life and college success overwhelmingly confirms the impact of families in propelling students to successfully complete college. A 1966 Johns Hopkins University report, Equality of Educational Opportunity, concluded that the home environment was the best indicator of a student’s likely success—not technology, textbooks or the quality of classrooms. It was an uncomfortable report, and it did not fit the social constructs germinating in the Vietnam era. The report was summarily dismissed.

However, while the discontent in such a finding is still strong, the empirical evidence supporting those findings grows ever stronger. A recent study by the U.S. Census Bureau finds that suspension rates of 12- to 17-year-old students are 5.3% when students live with two married parents, 10.2% if living with one parent and climb to 13.8% when living with a guardian. Family structure matters. Other circumstances, such as parental education, family income and neighborhood, also impact the likelihood of student success, but none as significantly as family structure.

In many rural districts, the combination of at-home family life and small-scale I-know you-and-love-you school-life supports and enriches the quality of the educational opportunity provided.

I have read about Houston ISD’s challenges: bid-rigging, cronyism, backroom deals. Elected board issues all. No mention of family life.

When looking for a college, if family life and the support of a family structure is important, try to understand whether or not the institution values the importance of family—if families are first.

If not, put the campus in the rearview mirror.