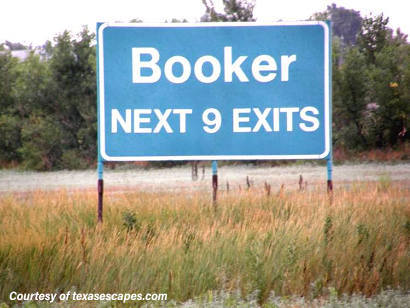 Thirteenth in a series on what to look for in college.

At 37 degrees 27 minutes 12 seconds north latitude, Booker is the northernmost municipality in Texas. Booker used to be in La Kemp, Oklahoma, but in 1917 moved south to be near the brand new Santa Fe railroad. The town adopted the name of railroad engineer Frederick Booker who helped orchestrate that move. The good folks of La Kemp hightailed it to Texas as fast as they could.  Like me.

Canyon, Texas, home of WT and two and one-half hours south of Booker, is about halfway between Sioux Falls, South Dakota, and Brownsville, Texas. Booker was the first school I visited on a tour of 132 high schools in the Panhandle and the South Plains. It was January 5, 2017, and as cold a day as my wife Mary and I ever experienced in Texas. A snow storm was predicted and materialized. When I mentioned to a faculty member that I was going to Booker, he asked me where it was. I told him I wasn’t sure, but I reckoned it was about six miles south of the North Pole. I was right.

Booker ISD is a small district. The high school in 2017 had a total of 144 students; twenty-six were juniors and twenty-five were seniors. The Texas Tribune currently reports an “A” accountability rating, a graduation rate of 100%—very rare, and a dropout rate of 1%—also very rare. Students, community members, teachers and school leaders all impressed me as frontier people.

Frederick J. Turner, a student of the frontier, made this observation in 1893 regarding the nature of people on the frontier:

That coarseness and strength combined with acuteness and inquisitiveness; that practical, inventive turn of mind, quick to find expedients; that masterful grasp of material things, lacking in the artistic but powerful to effect great ends; that restless, nervous energy; that dominant individualism, working for good and for evil, and withal that buoyancy and exuberance which comes with freedom—these are traits of the frontier, or traits called out elsewhere because of the existence of the frontier.

Dr. Brian Holt, superintendent of Booker ISD (recently named the sole finalist for Randolph Field ISD in San Antonio) warned me that students from Booker and the countless smaller schools dusted across the Panhandle believed that everybody at West Texas A&M University would be like those from their home town. But, having attended WT, he correctly suggested WT was not just a bigger Booker.

However, like Booker, WT has a frontier attitude. That attitude means that we welcome new experiences, realize the importance of community as a means of survival and appreciate the combination of the individual experience and community life. Strength in each leads to power in both. West Texas A&M University is a frontier, too. Don’t dismiss it—and miss it—because it’s close to home.

The best universities strive for acuteness in thought and inquisitiveness of mind; they are practical and inventive, with expedience and an understanding of how things work. They have lofty goals, a sense of urgency, “nervous energy” and rugged individualism. All are marks of free people in a free society on a frontier just as Frederick Turner outlined over 125 years ago.

Look for these things in a university. The best institutions encourage freedom in a community, rather than a herd mentality that too often dominates thinking. Institutions not on intellectual frontiers, but locked in mindsets that find safety in a center, are far from the edge of anything.

Silicon Valley, Booker, New York City, and WT—not a full house, but four aces and each one distinctive.