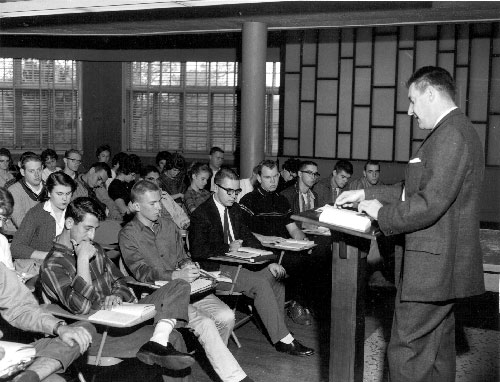 Tenth and final in a series on university struggles

While attaining a degree at Southern Illinois University in the 1950s, African-American Richard “Rick” Reynolds lived in an apartment with a dirt floor and a single light bulb. Students today would have a hard time believing that he was barred from many lunch counters in town, couldn’t participate in some student activities, and was castigated by a coterie of clods.  In spite of what had to be a challenging experience he remained a supporter and cheerleader of SIU.  Trapped in my less taxing life experience it’s difficult to imagine.  Rick was the national SIU Alumni Association President from 1999 – 2001. He did everything he could to help an institution where some members barely tolerated him–thankfully few.  People and the institutions they sustain change over time.

A 1950s graduate of Texas A&M University, Jesus “Chuy” Hinojosa  went on to become a gifted teacher and department chair in Urban and Regional Planning there.  Some of his student peers belittled him daily for his Mexican American heritage. He is one of the most kind-hearted and gentle men I know. He loved Texas A&M even though while a student some people were hostile towards him.  Human nature, warts and all, can animate individual decency even in the face of abject maltreatment.  Neither Rick nor Chuy allowed unfair, mindless, nearly criminal adversity get in their way in attaining an education.  Imperfect institutions, with imperfect people, are hopefully better now than then.

Universities function as powerful springboards past ignorance and mistreatment in spite of themselves.  These fellows sought a chance for self improvement through an act of will:  the essence of an education. Currently, too many universities rob students of the exercise of will by offering success without commitment.  The result is that universities and students struggle. And, both fail.  Human nature is at work in its wisdom and want.  Change is realized in painful increments.

But some student attributes are changing rapidly.

College preparation for the majority of freshmen is not as good as it was 50 years ago. Habits of the mind, intellectual curiosity, reading, writing, and calculating skills are not what they used to be.

More than ever it is believed that an education guarantees a good job and happiness. Students want to be able to find work at a living wage when they graduate. Mid-twentieth century graduates found good jobs.  Now, more help is available in both high schools and universities for students who need it; yet, graduation and employment placement rates are weak.

There are manifold opportunities for community service encouraging students to be more altruistic than ever before, but there appears to be a tendency towards self centeredness.

Student indebtedness, rare and minimal 70 years ago, now averages a suffocating and stress inducing $30,000 per graduate.

Campuses are more diverse than at any time in history. Most college students are white, but decreasingly so in the past 50 years.  The National Center for Educational Statistics current report shows that Black and Hispanic students are on the rise, and some states predict 50% to 80% of graduates will be minorities by 2020.  More students are now nontraditional — they are older, often married with children, full-time working adults, who pursue a degree to gain a better position in the current economy according to The Hill.

Contrary to misconceptions students party less now than they did 50 years ago.

Institutions and individuals must change.  But human nature remains the same. In its best manifestation it provides a tenacity and determination that is remarkable: Rick and Chuy prove the point.  Likewise many current students of every stripe, income bracket, natural ability and academic preparedness overcome obstacles in order to pursue an education.

Universities and students will struggle if the number of degrees granted and similar measures are the only benchmarks of success.  Life changing educational opportunity, attained even in a flawed and imperfect educational setting, is the true yardstick of the enterprise, and is measured graduate by graduate.