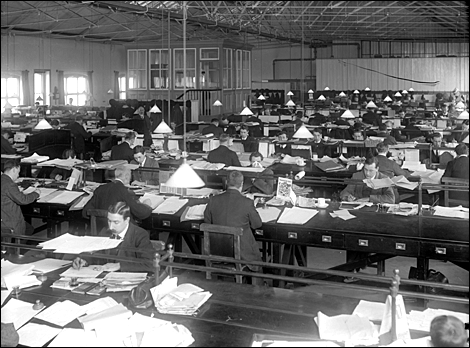 Ninth in a series on university struggles

Administrative and bureaucratic operatives at universities have grown at rates that exceed even the rates of cost increases experienced by students and families. Rules rather than academic purpose govern too many institutions. Bureaucratic brigades publish reports to prove value. During the two decades from 1985 – 2005 faculty ranks grew 30%, administrators 85%, and attendant staff, 240%.  These self-inflicted hurdles cause universities to struggle.

The abilities of students to think, act, and exercise skill are the only true measure of effectiveness. And, the educational marketplace will always decide whether or not institutions are academically effective.  Apollo Education Group understands the importance of purpose as the University of Phoenix, its fair-haired child, gasps for air.

Purposeless overhead, and in the case of U of P Phoenix profit, chokes the enterprise.

Demos, a Manhattan group of pontificators, reports public higher education quagmire is the result of declining state support.  Direct state appropriations have decreased to be sure.  Demos does not blame administrative bloat, regulation or bureaucracy but identifies them as ancillary contributors.  They are wrong.

New York Times editorialist, Paul F. Campos, shares a different perspective.   He reports “Even more strikingly, an analysis by a professor at California Polytechnic University, Pomona, found that, while the total number of full-time faculty members in the C.S.U. system grew from 11,614 to 12,019 between 1975 and 2008, the total number of administrators grew from 3,800 to 12,183 — a 221 percent increase.”

Informed action and changed behavior should operate in the boardroom and the CEO’s office. Institutions of every stripe must change operational and management practices.

The states may be trying.  In Illinois, Thomas Cullerton’s Senate Bill 2170, proposes to create the Public University Administrative Costs Decrease Act. Its intentions are good. SB2170 requires that tuition or fee increases, benchmarked against 2015 – 2016 levels, cannot be implemented until the auditor general verifies a decrease of administrative costs by 25%. A 25% reduction in administrative costs is a noble goal. But, in order to report administrative cost reductions additional bureaucrats are required.  That is the struggle.

Boards and executive leaders should hold themselves accountable for tuition and fee increases. They lead, or they don’t.  State funding reductions should be applied to institutions where student population decreases and administrative costs simultaneously increase. That seems reasonable work. Senator Cullerton is right. But, real institutional efficiencies come from leadership actions, not rules and regulations.

In addition, Illinois provides significant taxpayer support to private universities through the Monetary Award Program. Private schools make up over 50% of the MAP eligible institutions.  Action to reduce administrative costs should effect private and proprietary institutions that receive MAP allocations.  The MAP budget for this year totals $373 million and the Illinois Student Assistance Commission  should press for clear lines of responsibility and authority.  A struggle to be sure.

The Delta Cost Project, a study of college spending that spanned 21 years between FY 1987 through FY2008 thoughtfully reports that opportunities to reduce administrative costs become more important as state funding decreases and tuition increases.  Berkeley, Cornell, and the State University of New York responded to the crisis and incurred real savings recognizing that the struggle for fiscal viability is not a political chimera.

Some struggles with bureaucracies and the finances they manage are more pronounced and appear misguided at best.  Last month the New York Times reported that NYU is spending over $1.1 million to renovate the presidential house, a penthouse on Washington Square.  This is after buying out former NYU chieftain John Sexton who spent money wildly on activities and accoutrements tangential to NYU’s academic mission.  Especially troubling considering the record debt loads accrued by NYU graduates.

Entangled bureaucracies obfuscate authority and efficiency crippling large organizations while creating a sense of indispensability for processes that numb effectiveness.   A recent report from The Heritage Foundation reveals the rising costs of regulation inevitably expand purportedly good management and red tape to levels unimaginable only a few years ago.  Governments and governance create rules.  Rules create requirements.  Requirements lead to people to satisfy them.  And eventually bureaucrats are produced.  It has become a national pastime.

Dense layers of workers do little to improve function or efficiency but disingenuously produce the appearance of oversight and responsibility.  And large educational organizations suffer with increasing costs and decreasing effectiveness at.  And the weight of the struggle is borne by the student.

1 thought on “In Over Our Head, with Overhead”