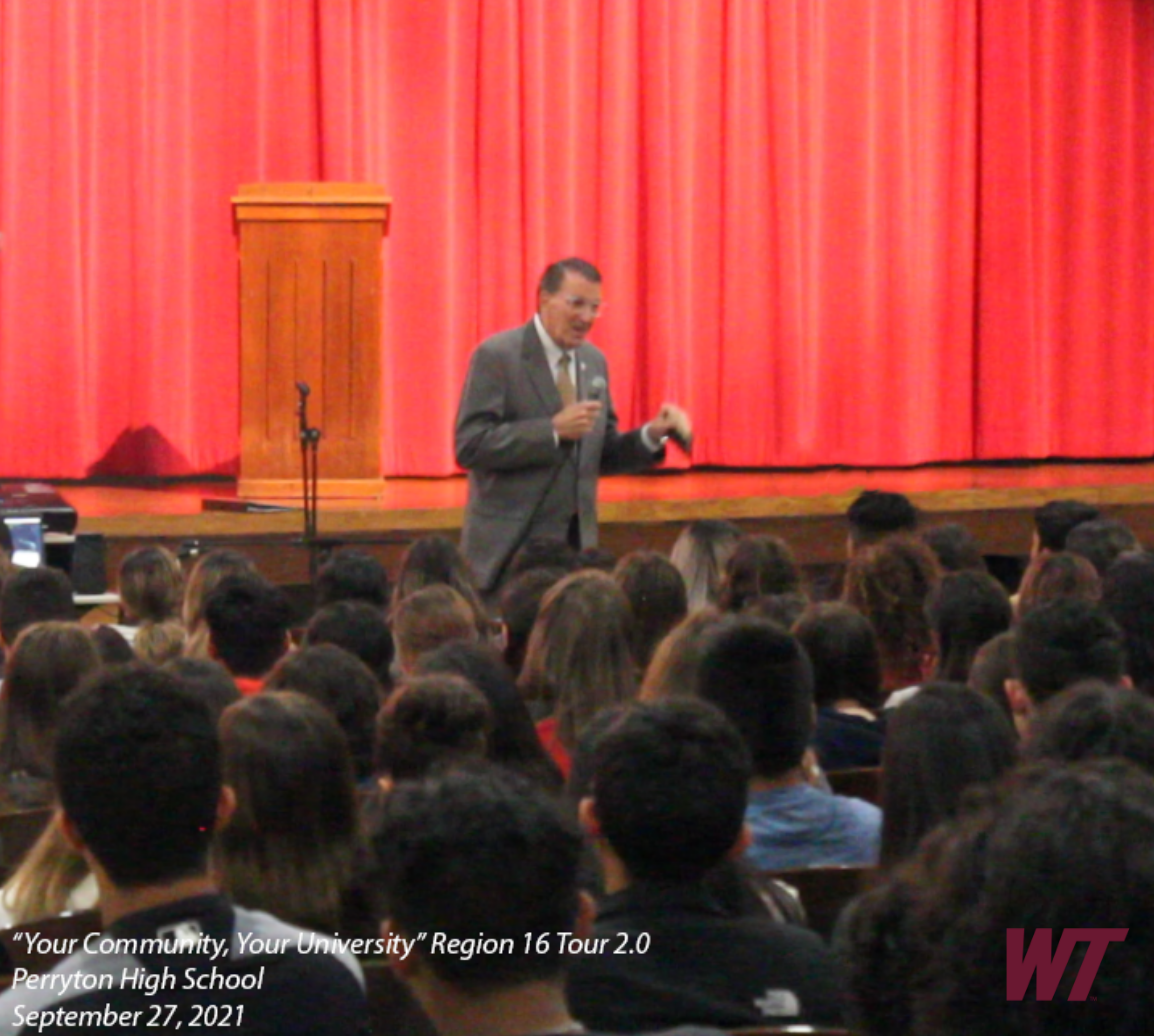 The anthem of the Rolling Stones and the genesis of the British invasion, “(I Can’t Get No) Satisfaction,” moaned in depressingly plain language that “satisfaction” was impossible. The students of the 1960s loved it. Millennials and post-millennials question a new idea of satisfaction’s possibilities.

I’ve been visiting Texas Panhandle high schools and looked out to audiences already totaling more than 2,000 students in various schools, from urban institutions to “little red school houses.” The look in many of the eyes peering back suggests a cross between wonder and doubt. Will a college education make them happy?

Being honest and straightforward, I tell the students that if I could guarantee them the college education we offer at West Texas A&M University would make them happy, we would be the largest university on the planet. I have to tell them that’s a guarantee not offered. Don’t confuse happiness, satisfaction and joy, although they are all in the same neighborhood bound together by the seemingly everlasting glue of the human condition.

Arthur Brooks, in an Atlantic reflection, “A College Degree Is No Guarantee of a Good Life,” addresses the issue head-on. By design or default, university leadership often implies a happiness or satisfaction guarantee. Likewise, elected officials pronounce the idea that a more educated society is beneficial. That’s all true, but the fault here – and this grieves me – is that a certificate of attendance, a college degree, does not always affirm being better educated. Additionally, lenders and bureaucrats who benefit from a nearly $2 trillion loan industry hold out the same proposition. To be sure, there are correlations. However, the correlations are not nearly as strong as many would leave young people and their families, to believe. This may be especially egregious in first-in-family students and parents believing that a college education is a panacea or meal ticket. In both cases, they can be wrong.

Recent college graduates tend not to be as satisfied in the workplace as seasoned pros. A finding reported in a marketwatch.com story described that being happy is not correlated to education level but more so to age and income. A truthful finding also reveals that college grads felt “less fulfilled than workers who didn’t continue their education past high school.” All of this follows a study on the relationship between employee satisfaction and their salaries conducted by Glassdoor. The relative dissatisfaction of some college graduates may be due to the ever-increasing burden of indebtedness to attain degrees that appear to offer less and less. The maxim? The greater the level of indebtedness, the more difficult it is to achieve a sense of satisfaction in the workplace.

A Harvard Health Publishing study, coupled the sheer benefits (satisfaction) of increased earning potential usually, is associated with a college degree and having a sense of purpose. Purpose can manifest itself in many ways: community engagement, family circumstances and relationships, and other conditions of life that are not necessarily attributed to a college education. This study suggests that purpose creates increased health, leading to a stronger interest in protecting health, reducing stress and generally being more engaged.

Remember the college admissions scandal? Actress Lori Loughlin was accused of bribing officials to get her children admitted to USC. Mesmerized by the mirage that a certain college guarantees better job prospects, higher earnings and a general sense of well-being are a misguided mismatch. An Atlantic piece, “Kids Are the Victims of the Elite College Obsession,” reveals parental pressure in attaining admission to highly competitive schools creates burdens for parents and students. U.S. News & World Report, summarizing a study from Gallup and Purdue University, demonstrates how selective schools do not always guarantee a greater likelihood of being engaged in their jobs or having a higher sense of purpose. The elite pecking order does not guarantee satisfaction or well-being after graduation. Rather, the student experiences in college, in various curricular and extracurricular settings, are more likely to impact post-graduation happiness. This study revealed a single professor, a mentor, could powerfully impact students after graduation. Faculty who care may be more important than branding or prestige.

Positive, lifelong impactful experiences occur at many different institutions regardless of rank or status. The lifelong burdens of college debt and the global impact of debt on disillusionment after graduation make genuine, high contact/high-efficiency institutions appealing. Many regional universities, such as WT, provide efficacious opportunities for good skills and critical thinking while providing memorable and valuable educational experiences. A powerful one-two punch for many students and families. The Rolling Stones may have missed it. I might have too. But, the prophet Isaiah offered this advice heeded and valued by multiplied millions for two millenniums:

“And the Lord will guide you continually and satisfy your desire in scorched places and make your bones strong; and you shall be like a watered garden, like a spring of water, whose waters do not fail.” Isaiah 58:11