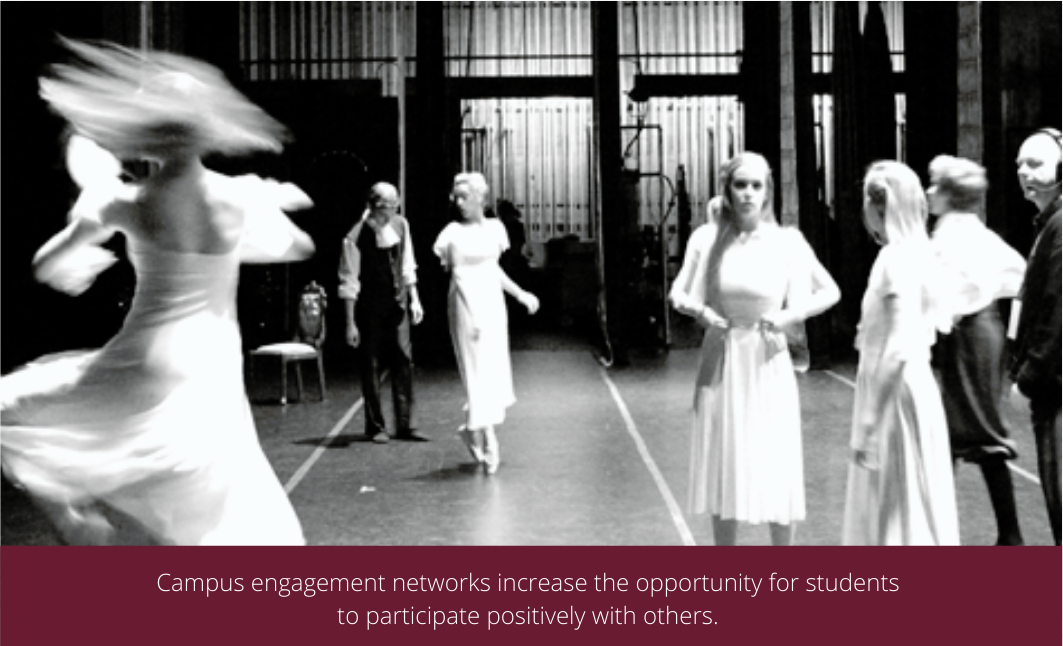 The fourth and final piece from November 2017. A thriving campus is of vital importance at WT, a vision I had when I first arrived and one that is still at the forefront.

National studies indicate that students who live on campus perform better academically. Campus engagement networks increase the opportunity for students to participate positively with others. However, while detrimental distractions diminish, they do not disappear. Jobs are healthy attractions and lead to academic success. Students employed between 10 and 19 hours per week while attending college, perform better academically. A future-oriented university could give priority consideration for on-campus student employment to students that live on campus. Living plus working on campus has a greater impact on academic performance than off-campus work, and provides a one-two punch for learning.

A library, Internet access, food service, bill paying, tutoring, recreation centers, healthcare, entertainment, cultural interaction and a number of other necessities and opportunities are included in on-campus living. Walking, bike riding and university shuttle services eliminate the need to use a personal vehicle on a day-to-day basis. This is all cost-saving and convenience generating. Millennial and younger populations tend to value convenience. In addition, the costs are competitive. Nationally, average costs of room and board for 2017-2018 at public masters’ universities exceeds that of West Texas A&M University, for example, by 25%. Check costs carefully – campus by campus.

When calculating the cost of on-campus living versus off-campus living, students and families should look at the whole picture. Putting four students in a two-bedroom apartment can provide a significantly lower cost alternative to on-campus room and board rates. But, the hassles of splitting bills, buying and preparing meals, transportation and other factors abound, and the total costs may not be as different as a cursory review indicates.

Some areas adjoining campuses have high crime rates. No campus is completely safe and a false sense of security is misplaced. Students need to walk in twos or threes at night whenever possible, stay in lighted and highly traveled areas, and report activity suspected to be criminal, no matter which university they attend. I regularly read campus police reports and find that effective campus security provides a jump-start for safety, without which, academic experience is diminished.

Students who live off-campus are more likely to engage in risky drinking than students who live on-campus. This does not suggest that students who live in dorms will not drink, use drugs or engage in risky behaviors of every sort. They do. Risky alcohol consumption by university students, many of whom are underage, leads to significant problems while attending college and sometimes long afterwards. As the number of drinks consumed in a week increases, the GPA’s of students decrease. An incontrovertible fact.

Typically, off-campus lease agreements are for 12 months, and premiums are paid for semester-by-semester arrangements with summer considered an additional contract. The lease approach creates transient arrangements, sublease and other complicating factors.

Meal plans contribute to on-campus living costs. Frequently, as students advance from freshman to senior status, the number of meals eaten per week on campus decreases, reducing the cost of on-campus living. In addition, some universities may decide that a “cold food” meal plan would be of interest to students. This might include a menu with very limited options. In student-populated apartments, the four food groups are Cheerios, doughnuts, bologna and Top Ramen. Campuses should reflect on every opportunity to reduce costs, and focus on the power of a good education, sans frills.

A Greyhound bus dropped me off at Ralph’s Pizza on Eastgate.  As I trekked up New Main Drive toward the stately Administration Building, dragging my drab green footlocker and my mother’s pale blue Samsonite suitcase, I thought to myself, “What have I done?”

I headed for a dorm room, a new experience that began the transformational process of changing me from a “damn Yankee” into a born-again Texan. I would not trade my campus experience for the world, a dorm room without air conditioning, communal bathrooms, institutional food (that wasn’t bad) and a myriad of other elements that I experienced all so that I could become an architect. I didn’t know this was “going to college.”

The experience was priceless. “What had I done?” I made the third best decision of my life. One and two? Another time, another place.